So memorizing lists and sub-lists of stuff using the old "focus, repeat, repeat and repeat" style of getting things in your head is getting as old as I am. Thankfully humans are a wily bunch and came up with a whole range of tricks to make the 'oops upside your head' grab hold of things it shouldn't normally be able to, known as mnemonics (pronounced as 'NemoTonics' with a silent 'To')

Any mnemonic system is a hack to remember something, whether or not the 'something' is stooped in BS or truth, based on freshly shuffled playing cards, bad poetry word for word, capitals of states or why-the-hell-you-would-want-to-a-roo, numbers.

The right way to remember things (I've heard) is not to use any systems, but to create mental models that attaches to experience of the subject matter and existing knowledge, you know, by not cheating. This bigoted blurb then is the wrong way.

The mind palace (or 'method of loci') is quite the famous trick up the memoholics's sleeve, and I thought it should be possible to hack at something to abstract boring-as-shit facts into something a tad more memorable.

The idea behind a mind palace is that one takes some known thing and add some weird mental scenes representing what you need to remember. They should interact with the known bits and hence create links. The scenes should prompt an emotional response and grab hold of your attention by imagination and make use of as many of your senses to invoke as much of an impact as possible.

To illustrate, imagine your right hand:

So that would be the FFF - Five Fun Facts I just Googled on Motivation. It:

Not the best associations I know, but it serves the idea of linking your experience (that right hand you know very well) and knowledge (fake or real) with something loony that you can associate with something different. It is like stitching facts together with scenes that are memorable enough to focus your attention on them.

Another vital thing is motion and space. Since our ancestors weren't all office chair potatoes like us covidian-work-from-homers, they used the built-in gyroscopes in their heads to travel AND know how to make it back to their bat caves without Google Maps. So in making a mind palace, the idea of moving through it in some way would make it even more memorable. Which is why many a mind palace example travels up your body (creepy) or moves through your house from room to room.

Taking the top bits into account, if you can make something familiar, emotional and tied to space and time, then you have something you can remember, right?

Sure it does, but the thing is, it turns out the 'familiar' is, well, personal. Since us meat bags never have the same input, and would never interpret it the same way, because it is based on the layer cake that is our brain. If a memory palace needs to be transferable, it should reference common memory. The way an engaging movie is, but with the script making associations with something they want you to remember, and flashing the facts into your brain as a kind of subliminal storytelling.

The stack of rooms

If I were better at hacking, I would grab the Goog's Streetview in your hood and infuse interactive mini-movies at key locations. GPT-3 (I hear it has a sense of humour) will generate the mini-movies that it ties up to facts peeps need to remember.

However, back in the reality of a wasted life staring at SQL and falling on my keyboard Ctrl-Spacebar'ing Java classes spewed forth from XML definitions, my options were limited.

Here the gist of it.

So I spent early 2020 hacking at the first version, which at least built essential room experience, but the transitions of getting plucked out of the room via a bungee cord and the room destroying and re-appearing was jarring to say the least.

In Dec 2020, I spent more time fixing the mobile quirkiness (still not quite finished) and turned the single room into a tower forming on top of your head and getting elevator'ed up into it, spinning around to face the first fact. The view from a-far looks like this. 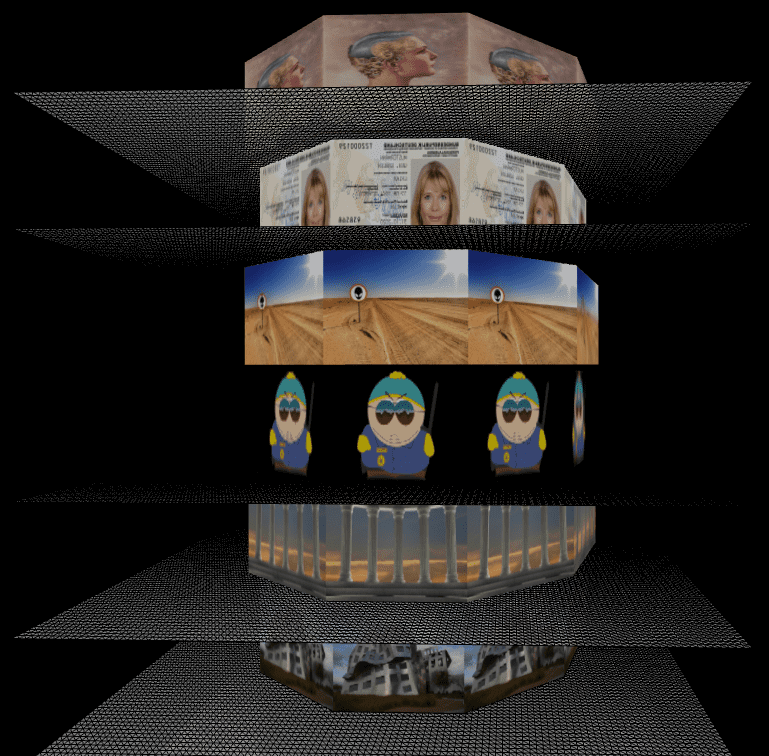 Here are some examples that the same app brings to life with different yaml files:

I've spent many a hour buggering around the different levels hitting keys like a loony at the beat of some EDM boom-boom-icky-icky track. But me-thinks it might be because I created it, and the stories the pictures tell are what my layer cake brain thought memorable.

Since it pretty much works on mobile, you have a reference to something that might 'refresh' your memory in your pocket, for those who still goes outside of home wifi range.

Once I know how to code in three dee for realzees, there is probably a maze generator based on the data in the pipes. The rooms might have movies and images playing in frames and corners of rooms etc. etc. It might be a little more spatially correct and more 'loci'.